Rhamnus is a genus of about 150 species (fewer, if some species are placed in Frangula), which are shrubs or small trees, commonly known as buckthorns. It is part of the family Rhamnaceae. Sea buckthorn is not closely related.

Rhamnus frangula (synonym Frangula alnus), the alder buckthorn, glossy buckthorn, or breaking buckthorn, is a tall deciduous shrub in the family Rhamnaceae. It is native to Europe, northernmost Africa, and western Asia, from Ireland and Great Britain north to 68°N in Scandinavia, east to central Siberia and Xinjiang in western China, and south to northern Morocco, Turkey, and the Alborz and Caucasus Mountains; in the northwest of its range (Ireland, Scotland), it is rare and scattered.

Alder buckthorn was first formally described by Linnaeus in 1753 as Rhamnus frangula. It was subsequently separated by Philip Miller in 1768 into the genus Frangula on the basis of its hermaphrodite flowers with a five-parted corolla (dioecious, and four-parted in Rhamnus); this restored the treatment of pre-Linnaean authors, notably Tournefort. Although much disputed historically, the separation of Frangula from Rhamnus is now widely accepted, being supported by recent genetic data though a few authorities still retain the genus within Rhamnus (e.g. the Flora of China).

The genus name Frangula refers to the brittle wood. Both the English and scientific species names refer to its commonly growing together with alders (Alnus) on damp sites. Unlike other “buckthorns”, alder buckthorn does not have thorns. Other recorded names include glossy buckthorn and breaking buckthorn; historically, it was sometimes called “dogwood” through confusion of the leaves with those of Dogwood Cornus sanguinea. 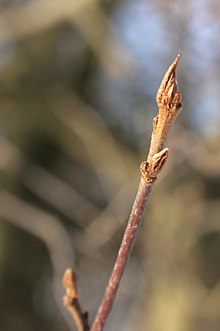 Alder buckthorn is a deciduous shrub, growing to 3–6 m, occasionally to 7 m tall. It is usually multi-stemmed, but rarely forms a small tree with a trunk diameter of up to 20 cm. The bark is dark blackish-brown, with bright lemon-yellow inner bark exposed if cut. The shoots are dark brown, the winter buds without bud scales, protected only by the densely hairy outer leaves The leaves are ovate, 3–7 (–11) cm long by 2.5–4 (–6) cm wide, slightly downy on the veins, with an entire margin, 6–10 pairs of prominently grooved veins, and an 8–15 mm petiole; they are arranged alternately on the stems. The flowers are small, 3–5 mm diameter, star-shaped with five greenish-white acute triangular petals, hermaphroditic, and insect pollinated, flowering in May to June in clusters of two to ten in the leaf axils. The fruit is a small black berry 6–10 mm diameter, ripening from green through red in late summer to dark purple or black in early autumn, containing two or three pale brown 5 mm seeds. The seeds are primarily dispersed by frugivorous birds, which readily eat the fruit.

Rhamnus frangula is one of just two food plants (the other being Rhamnus cathartica) used by the Common Brimstone butterfly Gonepteryx rhamni. The flowers are valuable for bees, and the fruit an important food source for birds, particularly thrushes.

Rhamnus cathartica (buckthorn, common buckthorn or purging buckthorn) is native to Europe, northwest Africa and western Asia, from the central British Isles south to Morocco, and east to Kyrgyzstan.

Rhamnus cathartica is a deciduous shrub or small tree growing up to 10 metres (33 ft) tall, with grey-brown bark and spiny branches. The leaves are elliptic to oval, 25–90 millimetres (1–4 in) long and 12–35 mm (0.5–1 in) broad; they are green, turning yellow in autumn, and are arranged somewhat variably in opposite to subopposite pairs or alternately. The flowers are yellowish-green, with four petals; they are dioecious and insect pollinated. The fruit is a globose black drupe, 6–10 mm (0.2–0.4 in) diameter and containing two to four seeds; it is mildly poisonous for people, but readily eaten by birds, which disperse the seeds in their droppings.

The species was originally named by Carl Linnaeus as Rhamnus catharticus, but this spelling was corrected to cathartica as the genus name Rhamnus is treated as being of feminine gender. Wikipedia/buckthorn

Rhamnus From Wayside and Woodland Trees A POCKET GUIDE TO THE BRITISH SYLVA BY EDWARD STEP, F.L.S.

Our two native species of Buckthorn are shrubs of from five to ten feet in height. In this one respect they agree; in almost all others they differ. Both are Buckthorns in name, but the Breaking Buckthorn (Rhamnus frangula) is quite unarmed, whilst many of the branchlets of the Purging Buckthorn (Rhamnus catharticus) are hardened into spines.

The Purging Buckthorn is distinguished by its stiff habit, and by some of the leaves being gathered into bundles at the ends of the shoots. The leaves are egg-shaped, with toothed edges, and of a yellowish-green tint, with short leaf-stalks. The yellowish-green flowers are very small, and will be found both singly and in clusters from the leaf-axils. There are a four-cleft calyx, four petals, four stamens, or four stigmas, for the sexes are usually on separate plants. The fruit is black, round, and about a quarter of an inch across, containing four stones. These so-called “berries” are ripe in September. Formerly they were much used as a purging medicine, but of so violent a character that their use has come to be discouraged, and the safer syrup of Buckthorn is prescribed instead. The juice of these berries is the raw material from which the artist’s sap-green is prepared. It may be found in woods, thick hedgerows, and bushy places on commons southward of Westmoreland, showing a decided preference for chalky soils. In Ireland it only occurs rarely.

The Breaking Buckthorn (Rhamnus frangula) is also known as the Berry-bearing Alder, its leaves, with their lateral veins, presenting something of the appearance of the Alder. Its more slender stems are purplish-brown in hue, and all the leaves are arranged alternately up the stems. The leaves further differ from those of R. catharticus in having plain, un-toothed edges, and their veins parallel one to another. The flowers are similar in size to those of the other species, but are whiter, less yellow, fewer in number, and on longer stalks. The parts of the flower, too, are in fives instead of fours; and the “berry,” though similar to the previous species, is much larger (half-inch diameter). In an unripe condition these fruits yield a good green dye, much used by calico printers and others. The wood made into charcoal is said to be the best for the purposes of the gunpowder makers, who know it by the name of Black Dogwood. The straight shoots of both species are used for forming walking and umbrella sticks, and those of longer growth for pea and bean sticks.

The Brimstone butterfly (Gonepteryx rhamni) lays its eggs on the leaves of R. frangula, upon which the larva feeds. The name Buckthorn appears to be due to an ancient misunderstanding of the German name Buxdorn, which should have been translated Box-thorn.

The horticulturalist A D Webster gives the following descriptions in his “hardy ornamental flowering trees and shrubs.”

RHAMNUS ALATERNUS.—Mediterranean region, 1629. This is an evergreen shrub, with lanceolate shining leaves of a dark glossy-green colour, and pretty flowers produced from March till June. There are several well-marked varieties, one with golden and another with silvery leaves, and named respectively, R. Alaternus foliis aureis, and R. Alaternus foliis argenteus.

R. ALPINUS.—Europe, 1752. This is a neat-growing species, with greenish flowers and black fruit.