Populus is a genus of 25–35 species of deciduous flowering plants in the family Salicaceae, native to most of the Northern Hemisphere. English names variously applied to different species include poplar, aspen, and cottonwood.

Almost everybody who has an elementary acquaintance with trees knows a Poplar at sight, the foliage being so very distinct from that of other trees. But the distinctions between the several species are not so immediately obvious. Five kinds of Poplar are commonly grown in this country, of which only two are regarded as distinct indigenous species. These are the White Poplar (Populus alba), and the Aspen (P. tremula). A third indigenous form, the Grey Poplar (P. canescens), is thought to be either a sub-species of P. alba, or a hybrid between that species and P. tremula. Then of common introduced species we have the Black Poplar (Populus nigra), and the Lombardy Poplar (P. fastigiata).

The Poplars (Populus) and the Willows (Salix) together constitute the Natural Order Salicineæ. The two genera agree broadly in the construction and arrangement of their flowers in catkins, but whereas the Poplars have broad leaves and drooping catkins, the Willows, with few exceptions, have long slender leaves and erect catkins. The sexes are not only in distinct flowers, but on separate trees—what botanists describe by the term diœcious. The males appear to be far more numerous than the females. In the popular sense there are no flowers, for there are neither sepals nor petals, each set of sexual organs being protected merely by a scale. The catkins containing these flowers usually appear before the leaves. As there is nothing to attract insects to the work, the trees have to rely upon the wind for conveying the pollen to the female trees. The first three species described below have from four to twelve stamens; P. nigra and P. fastigiata have from twelve to twenty stamens. The Poplars share the love of the Willows for moist places. They are found more frequently in gardens and hedgerows than in woods. Their growth is rapid, and their timber, consequently, is of little value, though its softness and lightness render it suitable for making boxes, and its whiteness and non-liability to splinter fit it for use as flooring. An additional point in favour of White Poplar for the latter purpose is its un-readiness to burn.

The White Poplar, or Abele (Populus alba), grows into a large tree, something between sixty and a hundred feet high, covered with smooth grey bark. Its branches spread horizontally, and its broad heart-shaped leaves, which vary from an inch to three inches long, are hung on long slender foot-stalks. In most trees the leaf-stalks are flattened from above, but in the case of the Poplars they are flattened from the sides, so that when moved by the wind they flutter laterally. These leaves have a waved margin, a smooth upper surface, and are snowy white and cottony beneath. The leaf-buds are also invested by cottony filaments. The roots produce numerous suckers, even at a distance from the trunk, and the leaves on these sucker-shoots are very large—two to four inches broad—of a more triangular shape, the outline lobed and toothed. The catkins, which appear in March and April, are cylindrical; those of the male trees may be as much as four inches long, each flower containing from six to ten stamens with purple anthers. The female catkins are not nearly so long, the two yellow stigmas are slender with slit tips, and the ovaries develop into slender egg-shaped capsules, each with its fringed scale. This species is said not to produce flowers in Scotland. In July, when the seed capsules open, the surrounding vegetation and ground are thickly strewn with the long white cotton filaments attached to the seeds. The wood of this tree is softer and more spongy than that of other Poplars.

The Grey Poplar (Populus canescens), which is thought to be indigenous only in the south-eastern parts of England, is not so tall a tree as P. alba, though it sometimes attains to eighty or ninety feet, with a circumference between ten and twenty-four feet. Its life extends to about a century, but its wood—which does not split when nails are driven through thin boards of it—is considered best between fifty and sixty years of age. The leaves on the branches are shaped like those of P. alba, but their under sides are either coated with grey down or are quite smooth; those of the suckers have their margins cut into angles and teeth. The female flowers mostly have four wedge-shaped purple stigmas (sometimes two), which are cleft into four at their extremities.

The Aspen or Asp (Populus tremula) does not attain either to so large a size or so moderate an age as the Abele. Its height, when full grown, is from forty to eighty feet, and after fifty or sixty years its heart-wood begins to decay, and its destruction is then hastened by the attacks of such internal-feeding insects as the caterpillars of the Goat-moth and the Wood Leopard-moth. The leaves on the branches are broadly egg-shaped, approaching to round, the waved margin cut into teeth with turned-in points. In one form (var. villosa) the leaves are covered beneath with silky or cottony hairs; in the other form (var. glabra) they are almost smooth. The leaves on the suckers are heart-shaped, without teeth. The leaf-stalks of the Aspen are longer than those of its congeners, so that they are constantly on the flutter—a circumstance that has led to an explanatory legend, to the effect that the cross of Calvary was made of Aspen-wood, and that the tree shivers perpetually in remembrance. Possibly the present inferiority of Aspen timber is to be explained in a similar manner. The catkins, which are two or three inches long, are similar to those of the foregoing species, but the scales have jagged edges. It is indigenous in all the British Islands as far north as Orkney, but, though commonly found in copses on a moist light soil, is more frequent as a planted tree in gardens and pleasure grounds. It is a characteristic tree of the plains throughout the Continent, but ascends to 1600 feet in Yorkshire, and in the Bavarian Alps is found as high as 4400 feet. It is not a deep-rooting tree, the root-branches running almost horizontally. Where accessible to cattle or deer, the foliage of the suckers is eagerly browsed by them.

The Black Poplar (Populus nigra) appears to be so called not by reason of any blackness of leaf or bark, but because of the absence of any white or grey down on the underside of its leaves. Its bark is grey, like that of the species already mentioned, but readily distinguished from them by the great swellings and nodosities that mar the symmetry of its trunk. It is a tree of erect growth, fifty to sixty feet in height, with horizontal branches, and leaves that vary in shape from triangular and rhombic to almost circular, and in width from an inch to four inches. They have rounded teeth on the margins, which are at first also fringed, and in their young state the underside is silky. The flowers in the catkins of this and the next species are not so densely packed. Those of the male are two or three inches in length, and dark red in colour; their abundance before the tree has put out its leaves makes the male tree a conspicuous object. The female catkins are shorter and do not droop. When the roundish capsules burst in May or June to distribute their seeds, the white cotton with which the latter are invested gives prominence to the female tree. The wood is chiefly used by the turner; in Holland, where it is extensively cultivated, it provides the material for sabots. The Black Poplar is not a native of this country, but it is generally distributed throughout Europe and Northern Asia. The date of its introduction is not known, but it has been here for many centuries, and is quite naturalized, springing up on river banks and in other moist situations. Some botanists regard it as only a variety of the Lombardy Poplar, but apart from the very different habit of the tree—not by itself sufficient grounds for separation—there is the more important fact that the Black Poplar rarely produces suckers from its roots, whilst the Lombardy Poplar does so constantly. However, this is a point we can leave for the botanists to discuss; for the purposes of this book the two trees are sufficiently distinct to be treated separately.

The Lombardy Poplar (Populus fastigiata) is no more a native of Italy than of England. Its home is in the Taurus and the Himalayas, whence it has spread into Persia. Introduced into Southern Europe, it has become specially abundant along the rivers of Lombardy, and so in France and England it bears the name of that country. Lord Rochford introduced it to England from Turin in 1758. Its leaves are like those of the Black Poplar, but its branches, instead of spreading, all grow straight upwards, so that the fastigiate or spire shape of the tree is produced—a shape only found otherwise among coniferous trees, particularly in the Cypress, the Juniper and the Irish Yew. It is its form, great height (100 to 150 feet), and rapidity of growth that have led to its wide use here as an ornamental tree—in many cases as a mere vegetable hoarding to shut out some offensive view. Its growth is extremely rapid, especially during its first score of years, when it will attain a height of sixty feet or more, provided it be grown in good, moist (but not marshy) soil. Its wood is, of course, of little value, and is chiefly used for making boxes and packing-cases, where its lightness, combined with toughness and cheapness, is an advantage. The bark is rough and deeply furrowed, unlike the other species, and the trunk is twisted. Like the Black Poplar, it has smooth shoots, and the unopened buds are sticky. It is propagated in this country by suckers and cuttings. It is said that the first trees introduced were so obtained, and that they were all from male trees; consequently, that we have no female trees here, and seed production is impossible. If the female grows here, it is certainly very scarce. The bark has been used for tanning.

The Black Italian Poplar (Populus monilifera) is another misnamed tree, for it is a native of North America, though introduced to England from the Continent in 1772 by Dr. John Hope. It has the distinction of being considered the most rapid-growing even of the Poplars. Loudon gives its rate of growth in the neighbourhood of London as between thirty and forty feet in seven years! Even in Scotland (where it has been largely planted as a substitute for Larch, since the partial failure of that tree) it attains a height of 120 feet in sixty years, when planted along the river banks. It is probably only a variety of P. nigra, which it resembles in most points, but is larger, and of very erect growth.

The Tacamahac or Balsam Poplar (Populus balsamifera) is another importation from North America, introduced in 1692. In its native country it grows to a height of eighty feet, but here forty or fifty feet is more usual. Its leaves are of more slender form than those of the other Poplars, egg-shaped, with a near approach to being lance-shaped. Their edges are toothed, their upper surface dark green and smooth, the underside whitish with cotton. The distinctive character of the tree is the fragrance of its foliage, which scents the air on moist evenings, and makes the Tacamahac a desirable tree to plant near the water, where alone it attains any moderate size. 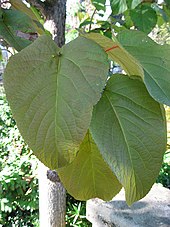