Cut back tender shrubs such as Penstemon, Caryopteris and hardy fuchsias after danger of frosts has passed.
Prune deciduous magnolias once the plant is in full leaf. If this is done in winter, when the tree is dormant, dieback can occur, and pruning in late winter or spring can result in bleeding. Midsummer is therefore recommended. 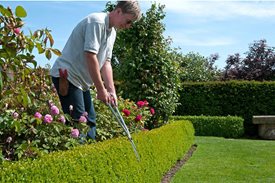 Clip evergreen hedges such as privet (Ligustrum), box (Buxus – left) and Lonicera nitida if needed. If they are not too woody, shredded clippings can be added to the compost heap.
Thin out new shoots on trees and shrubs that were pruned in winter to stimulate growth. Remove crossing stems and prevent overcrowding of new growth.
Prune out any remaining frost damage from affected evergreen shrubs.
Prune flowering shrubs such as Deutzia, Kolkwitzia, Weigela and Philadelphus after they have finished flowering. If this job is left too late, the new growth put on after pruning may not have sufficient ripening time to flower well next year.
Evergreens such as Viburnum tinus can also still be trimmed this month.
Rhododendrons can be lightly pruned after flowering. More severe pruning should wait until the following early spring.
Prune overcrowded, dead or diseased stems of Clematis montana once it has finished flowering. Untangling the stems can be fiddly, but once you can see where you are cutting, you need not worry about pruning this plant – it will take even hard cutting back very well.
Young mimosa trees (Acacia dealbata) can be cut back once all risk of frost has passed. Mature trees respond less well to hard pruning.
Prune wall-trained pyracanthas, removing any shoots coming out from the wall, and shortening other new growth to about 8cm (3in). This encourages spur formation, and increased flowering relative to green growth. 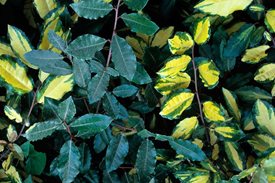 Remove any reverted green shoots on hardy variegated evergreens (such as Elaeagnus, left), to prevent reversion taking over.
Twining climbers (such as honeysuckle and Clematis) need regular tying in and twining around their supports.
Tie in climbing and rambling roses as near to horizontal as possible. This will restrict sap flow causing more side-shoots to grow along the length of stem. Therefore more flowers will be produced.

In wet areas, you can still plant containerised trees and shrubs. But if summer rainfall is scarce, then planting is best avoided. You would be wiser to wait until autumn, when the weather will work with you rather than against you to ensure the successful establishment of your new trees and shrubs. 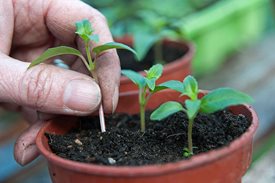 Take softwood cuttings of deciduous shrubs, including Caryopteris, Forsythia, Kolkwitzia, lavender and rosemary if not done last month.
Take softwood cuttings of many deciduous shrubs, including Fuchsia (left), Hydrangea macrophylla, Philadelphus and Spiraea.
Layering is a good way to propagate climbers and lax-stemmed shrubs. Layers should root by next spring, especially if attention to watering is given during dry weather. Examples to try include Philadelphus, Wisteria, Akebia and Lonicera.

Hybrid tea roses can be disbudded, removing all smaller buds from the cluster that forms at the shoot tip, leaving the largest central (or ‘king’) bud to develop into a large, show-stopping bloom.
Ensure newly planted trees and shrubs do not dry out. Water with rain, grey or recycled water wherever possible.
Loosen any tree ties that are digging into the bark, or could do so soon as the trunk girth expands.
Sprinkle fertiliser around perennials, shrubs and roses.
Water around the crown of tree ferns, especially newly planted ones.
Dig out tree and shrub suckers. If sucker removal is difficult, sever the root to isolate the sucker from the parent tree and then carefully treat the sucker with glyphosate (as found in products such as Roundup Tree Stump and Rootkiller). 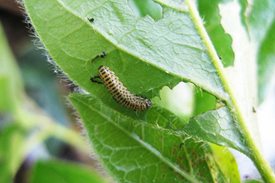 Check roses for signs of blackspot, aphids and leaf-rolling sawfly damage.
Viburnum beetle grubs start nibbling holes in the leaves this month, giving plants a tattered appearance. Inspect V. tinus and V. opulus regularly and spray or pick of the grubs by hand.
Phytophthora root rots can cause die back on mature trees and shrubs. Wet winter weather followed by a hot spring and summer can encourage this problem on susceptible woody plants.
Inspect sick looking box and holly trees for signs of blight.
Check for damage or cankers on deciduous trees.
Caterpillars, aphids and other fly pests can all be problematic at this time of year. Early infestations can be managed by hand removal, but approved insecticides are necessary for more serious attacks.

Tree and plant classification. Classification of trees and plants 🌲Gymnosperms 🌳Angiosperms How the plants are classified?...

Christmas shop - Garden plants & products in store this week. Make Christmas magical with a little help from Crocus this festive...

What is Crocus? Crocus is the UK's biggest gardening web site. But it's not just our size that matters. We hope to give the whole...

Gardening tips for September. The best monthly gardening tips from The Eden Project, National Trust, BBC and YouTube for London and UK...